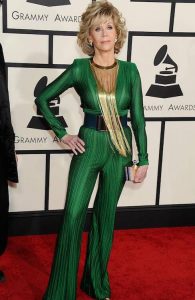 If there’s one thing Jane Fonda believes in, it’s not slowing down.When it comes to health and fitness, she isn’t calling it quits either. While her days of high-intensity aerobics, leotards, and leg warmers are now behind her, the fitness guru still maintains her healthy lifestyle.

Health advice
Fonda’s health journey hasn’t always been easy. She’s been open about her struggles with poor body image and bulimia, which was a battle for her from puberty through her 40s, and she recently revealed she had a cancerous growth removed from her lip. Like many other celebrities, she’s faced scrutiny for plastic surgery she’s had done on her jawline and under-eyes, procedures she says were “minimal” but bought her “an additional 10 years of professional work” as an actress. But these days, Fonda is pretty content with being an octogenarian and isn’t letting age hold her back from living her best life.
“I have a fake hip, a fake knee and I’ve had a number of back surgeries, so I’m sort of half-metal and half-bionic now. I have osteoarthritis and getting in and out of a car is a challenge. But I feel lucky that I did a lot of fitness work earlier in my life because it means I’m stronger now,”.

Lifestyle rules
“I’m never going to stop. The most important thing is to keep moving, to stay active. That’s what I do and that’s how to stay strong. Too many people give up on exercise at a certain point.The mistake that so many people make is that if they can’t do what they once did, then they don’t do anything. Big mistake. We can allow our various infirmities to define us or we can say to ourselves, ‘I want to stay independent as long as possible. I want to be able to sit on the floor and play with my grandchildren. I want to carry at least some of my own luggage and not take 15 minutes to get out of a car.'”